Run Ebola Away in Oslo

When summing up the event, the team decided to arrange similar events in other European cities, starting with London, then Amsterdam, then Hamburg.

The event consisted of a run, where people paid per km, an “international Cafe”, serving e.g. Liberian coffee and being a cross cultural place, and finally an evening party, with live Norwegian and African music. We were happy to have lots of helping hands for the event from friends from various parts of the world, many of which had a Liberian background. At the run we had participants from the neighbourhood, many friends, and some new faces. During the cafe and the evening, there were mostly friends, but also a few others. Various presentations and speaches were held, and our colleague from Waka-Waka was present with his solar lamps.

The event was arranged October 11, 2014 at our community house at Jar, near Oslo, where we were fortunate to have the venue for free for the event. We established a CARD Europe Facebook (FB) page and a Press Release was sent to all major media, including TV and radio in advance. Unfortunately, the response from the media was low, but we managed to get an interview in a radio program. We also received a lot of support on the FB page for our efforts, including from the ex. Pope(!), Benedict Ratzinger. Invitations were also sent to all schools in the municipality and in the vicinity in Oslo, a number of businesses and organisations, as well as to friends and others via social channels. A number of friends and people originally from Liberia joined the event from different countries in Europe, and we caught the interest of others working towards the same aim, thus we were contacted by “Action against Ebola” in UK, who later joined in with us.

In order to raise awareness further, we decided to do a “stunt” in Oslo. So, with a big poster on each side and a paper crown on their heads saying “Ebola free from Liberia”, the “Liberian ladies” took turn in walking up and down streets inviting people to join the event and support the cause. 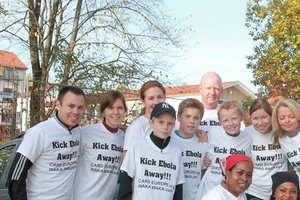