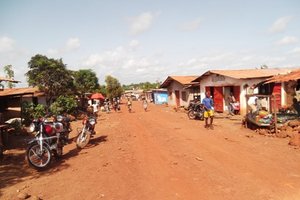 The land behind the unfinished, and abandoned, Ministry of Defense building in Congo Town had been left untouched throughout Liberia’s history. But it quickly became home to thousands of Liberians who had been displaced during the war, and who sought stability, and land, on which they could rebuild their lives.

Peace Island has lived up to its name. But now the residents are uniting against another challenge: the basic infrastructure its residents need to survive, such as roads, an adequate bridge to access the island, government-supported schools and clinics.

Government support has been slow to come for the community, mostly because residents on Peace Island live as squatters on private land, not officially recognized by government.

Land has been identified for a police depot, and also for a government health clinic. The community also wants to build a junior high school. Currently, a makeshift community school with mat walls caters to between 1,000 and 1,200 students. But the school was closed following damage from a recent storm.

The over 20,000 people in Peace Island have access to only two hand pumps but the safe water becomes dirty during raining season because surrounding wetlands are used as toilets by many in the community.

Community leaders hope to build pit latrines to alleviate use of the surrounding water for toilets to safe guard themselves from outbreak of sickness, but may never be implemented due to difficulties in getting government and donor support. The island’s only access point consists of a rickety wooden bridge. But the route will soon be flooded by waist-high water, as rainy season continues.

Peace Island has plans in place for the needed infrastructure to be built—land for the school, police depot, community hall and health clinic, as well as plans for a new bridge— but so long as the community continues to be designated as squatters, it appears unlikely the government or anyone else will provide the resources needed to get the projects underway.